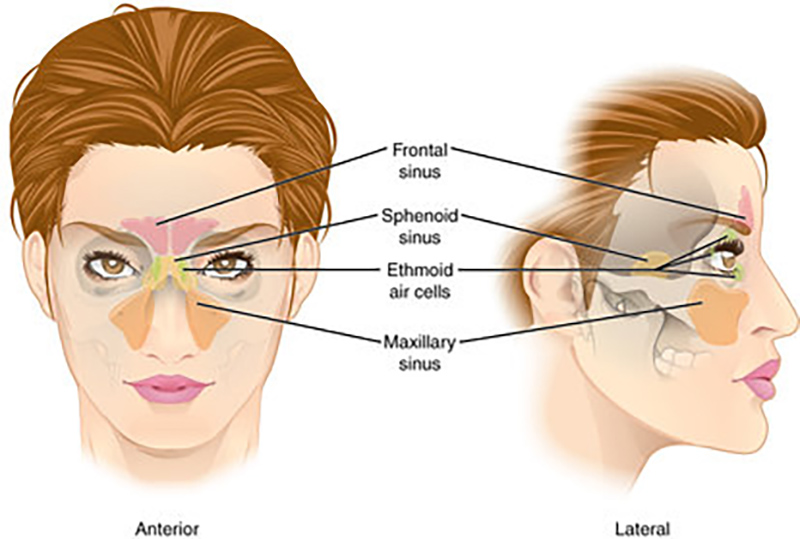 With the cold weather starting to creep in it’s no surprise that many of us will suffer with colds and sinus problems that can lead to headaches and a general feeling of stuffiness. Here are some facts behind the reason why some of these problems may occur and an outlook as to how osteopathic treatment can help to manage them.

As you may already know, there are four air-filled chambers within the facial bones of the human skull which are called sinuses. These are found in the frontal bones above your eyes, behind the upper nose, in the sphenoid bones behind your eyes and in your cheekbones. Their function is to humidify the air as it journeys to the lungs and trap bacteria in the mucus produced by the lymphatic membranes which helps to detoxify the human body. These bacteria can then be removed from the sinuses by swallowing the mucus or pushing it out of the naval cavity when blowing your nose.

Sinusitis and blockages occur when the membranes lining the sinuses become inflamed or when the passages allowing the drainage of the mucus become restricted. This can lead to infection and often a headache which may present in your forehead, eyes, cheeks and temples. Temporary relief can be found by taking medication to reduce the inflammation or dry up the sinuses but this does not deal with the root cause of the underlying problem.

Osteopathic treatment of sinusitis involves taking a more holistic approach. An Osteopaths aim will be to improve the subtle movement of the facial and cranial bones, which make up the walls of the sinuses, using both structural and cranial approaches to osteopathy. This will help to encourage the drainage of the sinuses and prevents the build-up of mucus within those sinuses. This will allow your breathing to become easier thus alleviating other symptoms associated with sinusitis such as headaches, stuffiness and a general feeling of being bunged up. Your neck, shoulders and upper back will also be treated to further encourage drainage and to help reduce the general tension that can exacerbate the sinus problems.

So, if the change of weather has gotten you feeling a little stuffy and bunged up, why not give your local osteopath a visit and see if this alternative approach to conventional medicine can give you the much needed relief that you may need this winter!